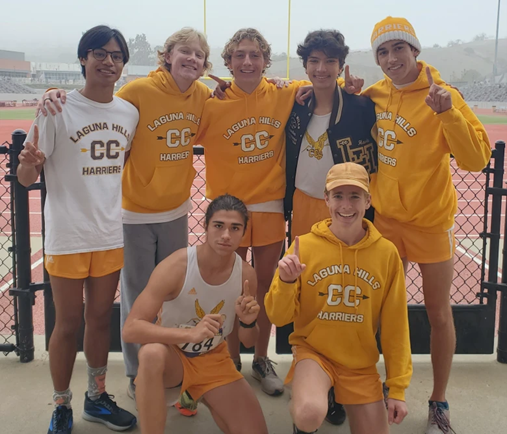 The Laguna Hills boys team won the Division 4 title at the CIF-SS Championships at Mt. SAC on Saturday. (Photo by Lou Ponsi, Contributor)

The Hawks boys and Lions girls both won in Division 4 and advance to the CIF State Championship meet at Woodward Park in Fresno on Nov. 27 along with several other county teams and individuals who placed high enough in their respective divisions to earn a trip to the state meet.

Laguna Hills, which came in ranked No. 2 in the division, didn’t have a single runner finish higher than 14th but relied on its depth to win the Division 4 championship, Hawks coach Chris Lynch said.

“There are no superstars on this team … so the only way that we win is by running as a unit,” Lynch said. “It might not be as glamorous. It’s definitely the blue-collar way to win a race but it works.”

The Lions girls stayed true to their ranking as the No.1 team in the state, winning their first section title since 2016. JSerra previously won four in a row from 2010 to 2013.

Freshman Brynn Garcia finished fifth to lead the Lions, who placed five runners among the top 27.

“Today we really needed our team to come through for us,” JSerra coach Chase Frazier said. “We had some people that didn’t finish where we thought they would but it didn’t matter when you have a team like our team. Today wasn’t our best effort by any stretch of the imagination but it was enough to win a CIF title so I’ll definitely take that.”

Dawson, who won the Division 2 boys race, was the only county runner to win an individual title.

The senior was running in fifth place through most of the race before making a strong move in the final downhill and sprinting to the finish line.

“Throughout the race, I understood that in that last 800 was where I need to focus and finish strong there,” Dawson said. “So for me, it was getting to the top of that reservoir and crushing that downhill, using my speed to my advantage in the last 400.”

Dawson has distinguished himself this season as one of the top runners in the state. He had first-place finishes in the sweepstakes race at the Orange County Championships, the Division 1 varsity race at the Mt. SAC Invitational and the South Coast League Finals, where he won in 14 minutes, 34.4 seconds.

“I was out here to compete and leave it all there,” said Stein, who has competed in high-level meets all season and finished among the top three in nearly all of them. “(The course) definitely tough with super steep hills, but it just gives you all that more time to fight.”

After finishing first in every one of her races this season, standout freshman Holly Barker of Laguna Hills finished third in the Division 4 race.

The top six finishers in the race were freshmen or sophomores.

Up to five individual placers who are not members of qualifying teams and who finish in the first 20 places in their respective divisions also advance to the state meet.

Canyon, Dana Hills and El Toro finished second, fourth and seventh, respectively, in the girls Division 2 race and will advance to the state finals.

The St. Margaret’s girls and boys teams finished second and fourth, respectively, and will also compete in Fresno.

Newbury Park, the No.1 team in the nation, made history with a perfect score of 15 in the Division 1 boys race.